As we show it today, Graphic News is the result of one year work. A year of reflections and tests on the best format to be used, a year of encounters and talks with the authors, a year of debate upon the subjects that we wanted to report and how to talk about them. Each story is connected to its author: Cristina, Emanuele, Francesca, Giulia, Marco, Mattia. We got ideas from them, and to them we proposed ideas, trying to find for everyone a subject that could engage and passionate them. We asked them to go to those places they would later draw, to talk to people and to study into deep a subject or a character. In a few words, together with them ( and others who will appear soon on Graphic News) we created the core of what we think is a veritable newsroom.

We are located in Bologna, a crossroads city for many cartoonists. It was therefore natural to start cooperating with authors who study or live here, or who simply passed through here. That is why some of the stories we present are set in Bologna, but still they are selected paying attention to their national and possibly international relevance. No Direction Home by Mattia Moro, for instance, takes place in a former school on the hills of Bologna, but the subject matter that it displays – the hospitality of the refugees who arrive in Lampedusa – is substantial for Italy as well as for Europe. The same applies for Poor Venuses by Francesca Zoni and The Sleep Therapy, both stories are reported in Bologna but they are relevant even beyond local borders. In the next few months we will expand these borders further, reporting stories from Italy, from Europe and from the rest of the world.

Nine stories to start with

The nine stories that we present to you can already anticipate the different directions on which Graphic News will orbit. One of our main targets is to experiment the possibility of comics journalism even on those fields that are almost unexplored. Not only reports then, but also opinions, columns, infographics, All of it created through the lens of comics’ language.

Poor Venuses by Francesca Zoni, proves once again how much comics are suitable to narrate challenging and thorny subjects. Maybe only a cartoonist could collect the words of those girls that we see every night on the streets, those girls we call prostitutes still knowing anything about them. Francesca met them, she talked to them, she listened to their stories, and finally she brought them back to us with an extreme tact. She did it without showing their faces but using graphic art to report their condition.

The last madhouses by Emanuele Racca, already explains its meaning in the subtitle: an introduction to the subject of OPG, the Italian Judicial Psychiatric Hospitals. These are places halfway between madhouses and prisons (the Italian government promised its closure by March the 31st) but they are known only among a small circle of operators. Emanuele told the story of how they were born and how they changed, turning the eyes upon the campaign that demand to say goodbye for good to these facilities.

Ercolano, USA by Cristina Portolano, is our first away assignment. Cristina arrived as far as under the Vesuvio to hand us in a story about the protection of artistic and cultural heritage. Unlike Pompei, where collapses are ordinary, Ercolano’s excavations are kept in good conditions thanks to an American foundation, but for who lives there some things are still unsolved.

The bar never lies by Marco Garofalo, is an experiment, a study on how a comics interview could be. This is the case of an imaginary interview created assembling quotes and poems of Charles Bukowsky, an interview from which, in our opinion, the desperate vitality of the American poet fully comes out.

The sleep therapy, by Pietro Scarnera, introduces a specific branch of medicine. The disturbances connected to sleep, like insomnia and obstructive sleep apnea syndrome, are more common than  thought. Such disturbances are studied and treated by the sleep therapy, a discipline in full development in the last few years.

Rooting for Lebowski by Brochendors Brothers, tells the story of a group of ultras from Florence that decided to support a never winning team in the lowest level of amateur football. Since then. they became the “owners”, the team got promoted twice and the Centro Storico Lebowsky became a response to a more and more business-ruled football.

Saved by the kids by Eliana Albertini is a reportage from the Bologna International Children’s Book Fair, the most important fair in the world for the children’s publishing industry. Eliana was among the 76 illustrators selected this year by the fair.

No direction home by Mattia Moro tells the story of a group of refugees. From Nigeria through Lybia and Lampedusa, their last destination is a former school on Bologna hills, where they self-managed for over a year a former school, creating an innovative experience of asylum.

Gaza Starts, by Gianluca Costantini, rolls out the first column of Graphic News. Costantini, who has been always commited in working on reality comics,will prepare some drawings from the project “Politial Comics” exclusively for Graphic News.

Voice to the Readers

This is, shortly, what you can find today on Graphic News. We did our best, but for sure the real judges are you, the readers. We ask you to follow and support us: explore the website, read the stories, let us know what you think about them, if you like share them on Facebook, Twitter, Instagram and Google Plus. But, above all, come back visit us and subscribe to the newsletter: we already have a lot of projects for the future.

Back to the start 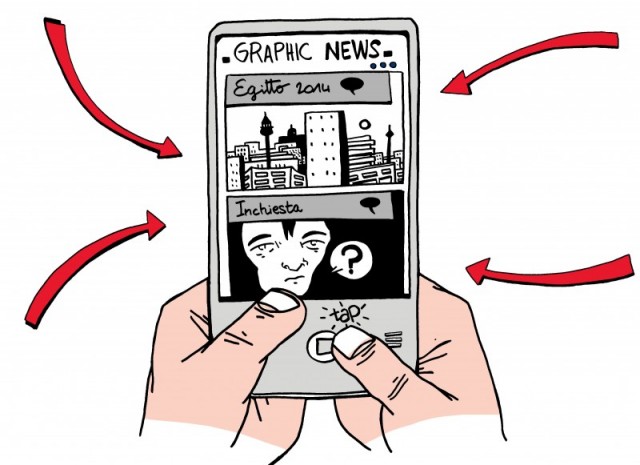 Welcome on Graphic News! As we show it today, Graphic News is the result of one year work. A year of reflections and tests on […]